The members and supporters of Team Isabel—a team named in honor of the granddaughter of Adjusters International's President & CEO Ron Cuccaro and his wife Sheila—brought in over $23,000, a team record! Team Isabel was formed eight years ago, when Isabel Cuccaro Alamin received life-saving heart surgery when she was just 10 days old. Now a thriving 8-year old, Isabel is proof of the amazing strides made possible by the funds dedicated for heart research.

The cold and rainy weather did little to dampen the spirits of the thousands of participants who surpassed the event's goal of $1.1 million, bringing in $1,204,594! Thank you to all who supported Team Isabel. We have raised the bar for 2009! 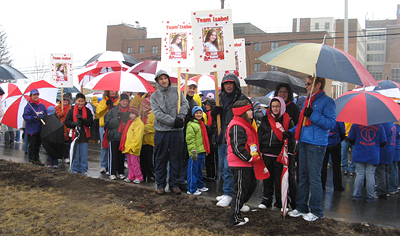